Christine O'Donnell: That Witch Does Not Kill Us—Only Makes Us Stronger

It was disclosed last Friday night—on HBO's not so politically incorrect show hosted by Bill Maher—that the Republican Senatorial candidate from Delaware, Christine O'Donnell, had "dabbled in witch-craft." "I had a few friends in high school that were into it and went to a couple of events," explained O'Donnell.
Of "witch," the ever exuberant, blood thirsty left exclaimed, "ding-dong, that bitch is done!" But hold on there Salem; let's not have the wicked-pot call a brewing-kettle black. Does the vile, and angry-left really think O'Donnell is practicing Wicca? The radicals just got done pillaging her because she is pro-life and stated in the past that she is against masturbation—a common Christian belief not to have lust in one’s heart, which Christ said was the same as committing adultery & would take away from God’s intent for procreation.
So what gives?
Think back to 1996. There was a certain womanizing President (who obstructed justice & was impeached) and an ever-forgiving First Lady—who relied on her "spiritual advisers to work through such a troubling, and difficult tribulation." 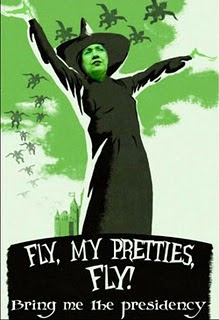 Yes. The current Secretary of State, Hillary Clinton, heroin to modern feminist and moderate democrats across the nation, had "spiritual advisers." Have these same hypocritical feminist and moderate democrats forgotten history so soon?  The Left'shypocrisy continues: It's not like the Republican Senatorial Candidate from Delaware was in college and doing cocaine, like President Barack Obama

affirmatively inked in his own.

Hillary Clinton was an adult (not seventeen years old) and living in the White House, performing duties as the nation's First Lady and she literally performed a séance atop the White House on the solarium. She invited one of her "spiritual advisers" (what a Christian might call a Pastor or Priest) over to perform witchcraft in order to talk to Eleanor Roosevelt. It is still unknown whether tax payer money was used to pay this "adviser" or not.   When the story broke, the liberal media ran to Hillary's defense, exclaiming, "it was not a séance--it was a brainstorming session!" Yes—sure it was—with a dead, progressive lady!

Candidate O'Donnell was young, curious and did not seek out the occult, but rather had a boyfriend with whom she was interested. She may have turned a blind eye for curiosity about her Celtic history, or maybe, at a confusing age for most, she felt disenfranchised. O'Donnell most certainly was not in her forties, nor the acting First Lady on roof's top solarium with Jean Houston. memoirs. Nor was she dealing cocaine, like Hillary's campaign said of Obama during the 2008 primaries. War on drugs or war for more drugs---you make the call. It all went down in the same primary when Obama called Bill Clinton a racist—who, per the New Yorker, was "our first black President!" Sound familiar? Nice tactics, aren't they?
not only fought tyranny & an all controlling regime (like one favored by Chris Coons—a self avowed Marxist) , but she won battles. She won so convincingly that she became a martyr & even modern day feminists idolize her for her fighting skill, but most likely not for her belief in God---if she just had a "spiritual adviser."


What's more interesting is, the left in America would rather attack a Christian for youthful missteps (unless a Democrat) than they would a self-avowed Marxist—Chris Coons—who is contesting O'Donnell for Delaware's Senate seat.

Marxism is the ideology that America has been battling since Democrat President, John F. Kennedy. JFK was the America's first Roman Catholic President & he was murdered by another self-avowed Marxist—Lee Harvey Oswald.

Marxism promotes a governance that every American President—until recent years—knew to be the enemy of Independence. It puts societal rights over the rights of the individual. And who controls society? The government controls society. It is an attempt to digress modern-day society and American Independence from governance back to the Dark Ages.

Socialism limits the potential wealth of the masses & may redistribute it as the Ruler, Emperor, King or Czar sees fit. Often times the Ruler does not give back to the masses (small guys or working families). Consider: who exactly are the benefactors that Barack Obama has redistributed to? The are his campaign donors—of course—including Big Unions & Big Wall Street Banks.


One thing is sure, considering the Lefts own cannibalism, they will most assuredly enjoy this phony, neo-witch hunt meant to burn another Conservative Christian at the stake.

I would remind the left of a Christian woman of year's past, who was also burned at the stake. Joan of Arc
Then again, it's not too surprising that O'Donnell is under attack by the radical, secular left. After all, The Roman Catholic Church utterly rejects socialist solutions, its atheism and communist style totalitarianism.

2425 The Church has rejected the totalitarian and atheistic ideologies associated in modem times with "communism" or "socialism..."
676 The Antichrist's deception already begins to take shape in the world every time the claim is made to realize within history that messianic hope which can only be realized beyond history through the eschatological judgment. The Church has rejected even modified forms of this falsification of the kingdom to come under the name of millenarianism, especially the "intrinsically perverse" political form of a secular messianism.
1886 Society is essential to the fulfillment of the human vocation. To attain this aim, respect must be accorded to the just hierarchy of values, which "subordinates physical and instinctual dimensions to interior and spiritual ones:"8
Human society must primarily be considered something pertaining to the spiritual. Through it, in the bright light of truth, men should share their knowledge, be able to exercise their rights and fulfill their obligations, be inspired to seek spiritual values; mutually derive genuine pleasure from the beautiful, of whatever order it be; always be readily disposed to pass on to others the best of their own cultural heritage; and eagerly strive to make their own the spiritual achievements of others. These benefits not only influence, but at the same time give aim and scope to all that has bearing on cultural expressions, economic, and social institutions, political movements and forms, laws, and all other structures by which society is outwardly established and constantly developed.9"

The reality of Joan of Arc is that her strength in battle goes directly to her faith in God—the two are inseparable. Of course, elections are not wars, but one thing is clear—like Christian women scorned in the past—young O'Donnell will come out swinging & she will not stop until the battle is done.

Such as it was with Christian persecution during the Dark Ages, of witch, clearly still exists within the modern day left.

A lesson hard learned for the radical-left regarding conservative Christians and the Tea Party, is best summed-up with an old adage, "that 'witch' does not kill us, only makes us stronger."
Posted by P.S. Read at 9/26/2010 08:41:00 AM