Washington D.C.
By Patrick Read
With November’s looming electoral battle rapidly approaching, Progressive-Democrats are pulling out all the stops in an effort to stave off their pending political-destruction. And as election-day draws closer, progressive-masses are banging about social networks and provably engaging in a systematic attack on average Americans—who are now resoundingly rejecting their transformational wants for America.
Detailed documentation makes clear that Progressive E-Thugs are “organized,” linked to national Democrat candidates and engaging in a disgusting assault on average citizen using social-media.
According to sources, Bill Clinton met with “Senior Democrat political operatives to coordinate a push-back to the burgeoning tea party movement” last February when Scott Brown won Kennedy’s former seat. "Big Government " verified Clinton’s “plotting a “push/pull” strategy” with an aim on the Tea Party—which according to polls, a good number are fellow Democrats.
Reportedly, the plan was to identify national Tea Party leaders and “engage in deep opposition research” in hopes to “create a mole from within” by way of threat or by bribe. Those who wouldn't turncoat, would be the target of character assassination to demoralize, deride, defame and derail them.
The Tea Party proved its impact & merit when Governor Chris Christie won in New Jersey, Governor Bob McDonnell won in Virginia and it further shows its might as core conservatives have scored big-wins during the primary season. As Bill Clinton is all too familiar, “politics ain’t ‘beanbags.” Lately, it's been more like a list of cyber-thugs named, "bean dogs."
The last sentence of Big Government’s report makes clear a ominous caution, “Expect the counterattack soon. Don’t say you haven’t been warned.”

Meet Neal Rauhauser, (pictured left) Co-Founder of Progressive PST (PPST)—a website that represents the social-media interests of (now) nine Progressive Candidates—with all but one being national. Another six candidates Rauhauser represented didn't make it past their primaries, understandably so.

Rauhauser is known in the blogosphere as “StrandedWind”— an implication that “wind energy” is being laid to waste by a lack of investment into wind-mill development —an inefficient technology from the Dark Ages. He writes for: the TheOilDrum.com, the CuttingEdgeNews.com, and the DailyKOS.com.

It should be noted that Daily Kos was founded by Markos Moulitsas Zuniga (on twitter), a self-avowed socialist who now appears with Keith Olbermann on Al Gore's Network, "Current."

Rauhauser has also appeared on e-radio shows, most notably Nicole Sandler Show where Rauhauser talks of activism & Agro-Innovation. He's a member of the radical-left’s blogger campaign, Net Roots, an organization with the goal to—unite & fight for socialized platforms—and to unionize bloggers. Apparently, in their collective mind, having a union boss will somehow bolster free speech. Rauhauser was featured as a speaker at their meeting last spring which was supported by DailyKOS. 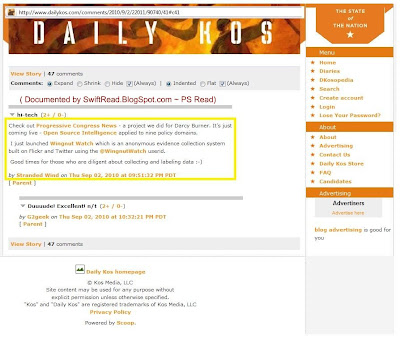 PPST’s Rauhauser is a Community Organizer, a network manager with Cisco ratings, a political activist, a radical environmentalist, an extreme-leftist blogger and on Twitter as Stranded Wind, Neal Rauhauser, and formerly as Wing Nut Watch—an account now banned for inciting Twitter users, while coordinating social-activists who attack those in disagreement with their Progressive Message. The account belonged to none-other than PPST founder—Neal Rauhauser—who openly admitted he created the account on his Daily KOS article.
He stated in his own comment section that he created his "Wing Nut Watch" account on or around August 30, 2009 as a means to monitor the right-wing. He did a lot more than just monitor though. Note: Wing Nut Watch's list of "Of Mass Destruction" e-thugs and Neal Rauhauser's list "Of Mass Destruction" e-thugs. They have the same users, though Neal's has a few more since his "Wing Nut Watch" account was deleted. 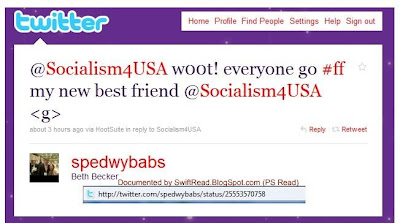 Beth Becker (left) is a co-founder of PPST & also writes for DailyKos. She is on Twitter as SpedWyBabs, Beth A Becker and RealSped. Becker quotes on her site that she attended “Netroots Nation 09, where the ‘Blog Workers Industrial Union’ and ‘Progressive PST’ were born.” Their company twitter account is Progressive PST. 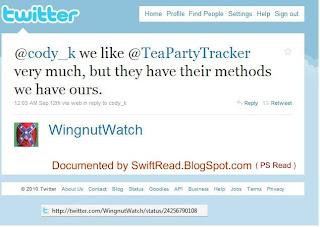 In his capacity to handle the above campaigns “social media needs,” Rauhauser also listed Tea Party Tracker (funded by the NAACP) and followed them very closely. His "Wing Nut Watch" account and group of e-militants would seemingly provoke others in order to get a negative reaction and then re-post reactions to Tea Party Tracker, who placed the reaction, without context, on their site.
And Rauhauser, per his website, was acting out while representing the internet aspects of listed Progressive Candidates and recently wrote that the entire Republican Party, the Koch brothers, everyone with Citizens United & each person with the Tea Party are all racists who want “economic ethnic-cleansing in Arizona’s District 05.” He clearly doesn't know what the term racism means. 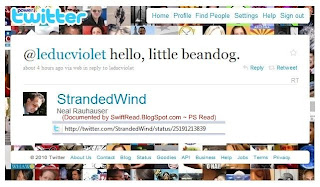 Rauhauser’s rationale for such a practice is “SB1070 and the ugly mood in Arizona overall, but (he) really thinks it was ‘in-district calculus.’” He actually used the term “in-district calculus,” while blaming others for social engineering (controlling society directly or indirectly). How Progressive of you, Neal! The statement reveals a cold & "calculating" mind frame and projects what the left is all about - "in-district calculating." 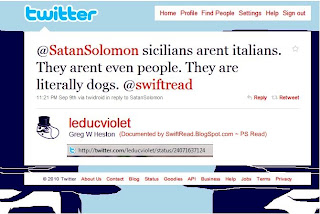 One might think that Rauhauser’s hateful rhetoric is a rarity, that is until one examines the rest of the evidence and associations that have come to light with PPST’s stated “volunteer group of social activists,” and those that appear to be paid to harass & threaten American citizens using Twitter. 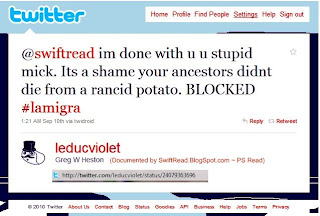 According to its website, “Progressive PST was created by progressives, for progressive (Candidates).” They developed, “TOOLS that are active 24/7 delivering (Democrat) messages to select Twitter audiences in novel ways” and has “the ability to have campaign-volunteers engage others on Twitter with pre-scripted messaging, allowing the campaign to maintain strict message control.” 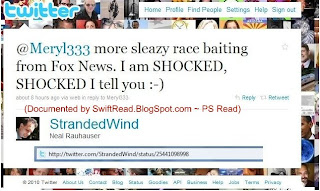 Per PPST, these volunteers, “discreetly monitor likely voter conversations,” and do so on behalf of the candidates they represent while “coordinating efforts across social media platforms” in conjunction with a campaign’s strategy.
PPST's testimonials on the site include:
Monitoring Rauhauser’s Twitter account revealed that some of his activities on Twitter has been legitimate coordination of messaging to further PPST’s client-interests. However, there was also a great deal of activity that appears to amount to nothing more than organizing cyber-thuggery and borderline cyber-stalking. 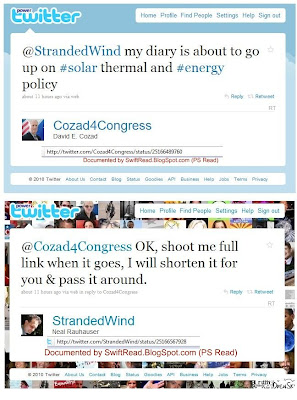 The documentation makes it clear that Rauhauser, the PPST Founder who serves his client’s social-media interests, also organized a group of E-Thugs meant to harass, threaten, provoke, disparage, intimidate, verbally assault, berate & employ hate-speech against those not in agreement with his brand of politics. According to the PPST site client page, the following are listed as clients and have hired Neal Rauhauser’s company to represent their message and to handle their social-media interests:
Progressive PST's Democrat Candidate List: 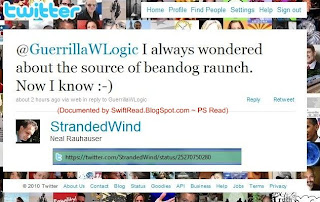 While presenting himself to be acting on behalf of the above listed Democrat candidates, documentation shows that Neal Rauhauser organized a squalid group of anonymous twitter-users as a means to attack the tea party and conservatives alike—even if not posting anything relative to Rauhauser’s list of clients. 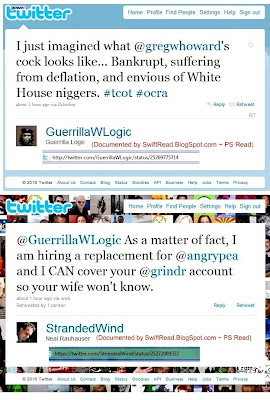 The Cyber-Thugs have a penchant for exposing personal information about their targets and misrepresenting factual information; and while doing so, they expose themselves to libel, slander, and defamation. Please take a few minutes to look at this photo album of screen-shots that have been so far released.

The reader can click the magnifying glass to enlarge the screen shots & click and drag to scroll the longer list’s.Take the time to note the conversations between these various characters and Rauhauser’s two accounts in question, @StrandedWind and @WingnutWatch.

Another graphic collection of Twitter screen-shots by PPST's Rauhauser and his thugs are found here, assembled by @NSOLD. By no means is this the extent of the documentation and evidence assembled in our investigation. 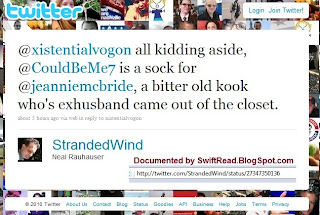 We have cached all web pages referred to in links, cached entire sites if they should be taken down, and cached the last 30 days of tweets from each one of the members of the “Legumes of Mass Destruction” one of many list assembled by Rauhauser.

If our information is disputed, we will be more than able to provide additional proof of these outrageous acts. And will, as already stated, expose more and more as time goes by.

Another graphic collection of Twitter screen-shots by PPST's Rauhauser and his thugs are found here, assembled by @NSOLD. By no means is this the extent of the documentation and evidence assembled in our investigation. We have cached all web pages referred to in links, cached entire sites if they should be taken down, and cached the last 30 days of tweets from each one of the members of the “Legumes of Mass Destruction” one of many list assembled by Rauhauser.

If our information is disputed, we will be more than able to provide additional proof of these outrageous acts. And will, as already stated, expose more and more as time goes by. 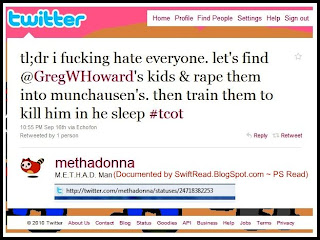 Rauhauser recently wrote in an article that his children and family have been threatened as result of the extreme, racist “teabaggers” & conservatives. Like this post made by one of his "followers" and member to his radical list? Or like this one? Maybe this one? Notice that they are all aimed at the same American.

Conversely, Rauhauser has been asked to verify this article’s assertions but refuses to support his allegations—unlike the authors of this well documented report—and we stand by our work, with much more to come. 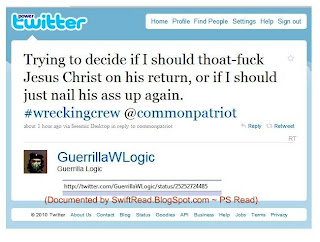 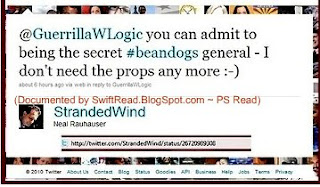 Rauhauser has only employed the age old tactic of pointing a finger at others first before being exposed. It has been used by the untrustworthy in politics time & time again. Hillary Clinton exclaimed a “Vast Right Wing Conspiracy at work” while seemingly still believed Bill—just before the case against him was proven & he was impeached by the House.

Harry Reid stated, “those teabaggers are racist,” and later was released his own racist comments about Barack Obama’s electability, because of light-skin and no Ebonics.

“I called it first” is a child’s game and the boy who called wolf, called it one too many times and abandoned his loyal villagers for the disbelief that people had in him.

Even in his last (for now) article, he still tries to intimidate & be tough saying he has underground connections through his ex-wife, who “knows cops,” and he recently contacted their “old friends.” In reality, he's crying for protection because he knows he did something very wrong. Also note he has offered no proof of a legitimate threat—no names, no dates, no screen shots and Rauhauser may have no political career left after this expose finally releases.

Based upon this evidence, Rauhauser appears to not only endorse, but use extreme tactics against normal, everyday users of social media in order to effect his goals, with no regard, nor compassion for the human condition. According to PPST’s web site, the above campaigns hired them & Neal Rauhauser to represent their interest—not his own. The documentation shows that Rauhauser to pay these cyber-thugs for their “services rendered.”
Is this what the Democrat Candidates intended to be done with the hard-earned money of contributors, when they hired Rauhauser? We have repeatedly made David Cozad aware of this dilemma and asked him to either endorse or deny their affiliation with Rauhauser and his street level thuggery. Thus far, we have received no response.
Posted by P.S. Read at 9/30/2010 03:38:00 AM