DEBT LIMIT: DEMOCRATS ARE THE PARTY OF NO 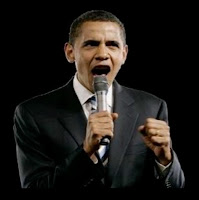 
Last Friday (July 22, 2012), in a stunning reversal of fate, Harry Reid solidified the Democrats as the real "Party of No" when he blocked the House of Representative's (The People's House) "Cut, Cap & Balance Plan" from even being debated by Senate.


So much for that pesky American standard: "Of The People, by The People and For the People." It's consistent for Democrats to ignore The People -- especially considering 70% were against Stimulus and it still passed.  70% were against Obamacare, and it passed from behind closed-doors. Now 70% support a Balanced Budget Amendment and it was just stonewalled by Senate Democrat Majority Leader, Harry Reid. Dirty Harry has now changed the All-American motto to: "Of, by & for selfish Senators who disagree with The People they were sent to DC to represent."

It shouldn't surprise anyone. 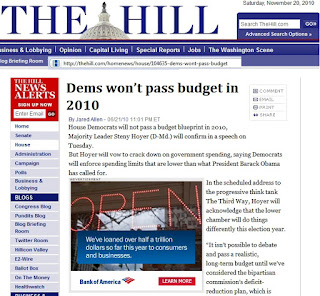 America is well past 800 days since Democrats even passed a budget. And it's plain to see that they are playing Russian Roulette in hopes Americans will once again forget that fact.  Forget the Democrats didn't even have the nerve to pass a budget after their record setting (and bank breaking) budget of 2009. And when Republicans tried to be adults & offer their own budget (Continuing Resolution) -- just like he did with Cut, Cap & Balance -- Dirty Harry blocked debate and demanded a group "up or down vote" without affording Democrats the opportunity to amend, question or even compromise.


It was just, "vote NO," from Dirty Harry.  He's an Army of One. His concerns outweigh "We The People's" concern. And he just limited The People's option & right to representation for one of the last times. 2012 approaches & Dirty Harry will most likely take his proper seat in the gallows.
No debate on the Pat Toomey Budget. No debate on the Rand Paul Budget. No debate on the Paul Ryan budget. No debate on Cut, Cap & Balance. And all while there are No jobs for the American People. No tort reform to limit cost of health care insurance. No Inter-State competition to drive down cost. No personal savings on premiums. And No freedom of choice for Doctors with Obamacare. Maybe that's what Dirty Harry is so afraid of - freedom & competition.
Even if The People were afforded the opportunity to debate, Barack Obama & Democrats already had plenty of debate from behind closed-doors. They debated with the Health Insurance Lobby. They debated with "Big Pharma" too. And they certainly made compromise (closed-door-deals) with them in order to pass Obamacare. To the tune of hundreds-of-billions of taxpayer dollars spent from behind closed-doors. Oh. They also debated & approved the now contested by States, "health care mandate." But shhhh - Dirty Harry says that you're supposed to forget that part of American History (its detailed here).
Cut Cap & Balance would have extended the Debt ceiling. At the same time, it would have made substantial cuts to spending. And it included a Balanced Budget Amendment -- which 70% of The People see a dramatic need for & favor.  After Dirty Harry ordered "No Debate" regarding a Balance Budget Amendment, I sent my ideas to the GOP via Twitter:


Posted July 22, this would be the ideal plan for Republicans. A two part plan breaking some of Cut, Cap and Balance into two separate bills. The 1st part would make Cuts to spending (the main issue in DC) proportionate to the increase of the Debt Ceiling. And include the ever popular Balanced Budget Amendment. One would think "Pay Go" Dems would be on board with a Balanced Budget.


What is "Pay Go?" (here) Pay Go mandates that all spending must be paid for, and bills not be funded via borrowing (which only creates more debt because of interest). Democrats passed and signed it into law just last year after bragging about Clinton. My how we all FORGET our vital history.  Dirty Harry loves to remind people that "it was Bill Clinton who signed four balanced budgets." But only for purely political reasons. He leaves out that the budgets were not Clinton proposals (which featured HillaryCare). They were Newt Gingrich and House Republican proposals (here) - just like Cut, Cap & Balance was a House bill.

We've all heard the subterfuge that Reagan raised taxes 11 times as President. Well no, he didn't.  First, Reagan signed the largest-ever tax cut in American History. It was a uniform tax cut across the spectrum of income. And it was consistent with Article 1 Section 8 (here) which states "all taxes shall be uniform throughout the United States."
Reagan passed the largest tax-cut in American History with Democrats running both the House & the Senate.  How? He told the truth: the economic decay resulted from failed progressive policies & failed Keynesian Economics over decades. He LED people to believe in themselves, not the government. "Independence" does not mean dependent on government. And to believe in the American Dream -- which is paved for by the FREE Market -- without Government interference!

The answer was given by the Father of the Republican Party, Abraham Lincoln, "We The People are the rightful masters of Congress, the Courts" (and OUR Market) not to overthrow the Constitution, but to overthrow those who pervert the Constitution."
The result was shocking for Democrats because even more revenue was collected as result of the tax cut.  You've heard of the "Laffer Curve?" Here is the economist on the Reagan Years (here).  Unemployment dropped, inflation dropped, and more people were apt to pay their "fair share" than to take a hand out, dodge taxes via loopholes or out of country tax shelters.  Revenue literally poured in from ALL shares.  In order to placate Democrats, the next year Reagan agreed to close tax loopholes (here). On the grand scale of things, the loopholes produced next to nothing compared to the new tax revenue produced (result of tax cuts).


1.) The first part of the new House Plan to Raise the Debt Ceiling and avoid default (while adding even more to inflation) should be a stand alone Balanced Budget Amendment.
If implemented, it would preempt spending cuts and ensure fiscal responsibility by both parties.  Yes, spending cuts still need to be made because the country is still operating on the largest budget ever signed into law. The only one signed by Obama totals almost $4 Trillion annually.
1a) The Republicans ought to include "Pay Go" - a Democrat plan that was recently passed and should be reinforced. As stated above, it was first introduced during the 1990s. How could Democrats vote against Pay Go & a Balanced Budget Amendment?!? This would certainly bleach the far left with sunshine as we watched the most ardent progressives try to defend fiscal irresponsibility & turn tail on liberal hero, Bill Clinton.

1b) The GOP could also make exceptions for the Balanced Budget Amendments, especially regarding "national security issues." The first role of government is to provide protection for The People. The same social contract has existed from the first republic in Greece, through feudal times of monarchies and into the modern era. Job number one of the President is to "provide for the common defense" and he swears an oath to "protect the Constitution from all enemies, both foreign and domestic."
2.) The second part of the plan should include uniform tax cuts, closing tax loopholes (like Reagan, above), spending cuts & a spending cap. With this part of the bill, yes, Republicans would concede to close some tax loopholes, but only after passing a (3%) tax cut across the board for both business & consumer. It was this combination that led to the incredible job explosion & economic recovery from Carternomics during the Reagan Revolution. 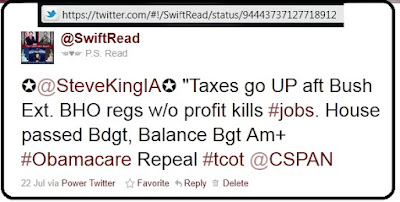 It also beckons the question: where is the Reagan-esque Recovery? Don't forget George Bush's Average Unemployment Rate was 5.4%.  He recovered from two recessions: one left by Clinton, the DotCom Recession. The other was result of 9/11, which liberals always forget or blame fellow Americans for.

Consider that Obama's Stimulus Bill is 1/10th of the total US GDP. One bill alone cost more than the War on Terror! The rest was spent on an ever increasing Federal Budget & on more fraud by our Government -- especially within real estate via Fannie Mae, Freddie Mac & the  Government mandated (Clinton / Cuomo)  "sub-prime loan scandal / redistribution."

People should be reminded that Obamacare also raises Capital Gains Tax 3%. With this increase, Obama contradicts JFK's policy of lowering capital gains as "no nation can tax itself into prosperity". How many former Democrat Presidents, who are so reliable to the left, can Barack Obama contradict?


One thing that no one is talking about? INFLATION. Raising the Debt Ceiling will result in more spending. When the Government spends more money -- whether via the Federal Reserve & Treasury "monetizing debt" (just printing money into existence) or via new / growing entitlement programs -- we put more dollar bills into circulation (increase supply) and the value of the dollar lessens. The result is inflation.

Things like gas & groceries cost more because there are so many  dollars in circulation that it loses worth. The dollar doesn't stretch as far & the poor are most effected. Some correctly say inflation is like a  tax because Government makes cost "necessarily sky rocket."


The country has a double edge sword facing it - inflation vs interest rates. It is now the 4th Quarter and the above plan would solve both the interest problem and the inflation problem.