Washington D.C.
By Patrick Read
.
Some media outlets find it funny for cyber thugs to threaten Americans with death, rape, sexual abuse and violence while making incendiary racial & religious epithets motivated solely by their progressive agenda. But when the coordinating affront is an organization hired by National Candidates

, it reveals an utter lack of respect

for the very country those candidates seek to represent.
Recently published was an article serving as the base of an exposé being released one article at a time. It was meant as an introductory piece only – not at all comprehensive in nature. There have been some premature reports (Gawker) which only served to detract from the issue at hand – that a political organization, hired & funded by national democrat candidates, has set out to attack conservatives and tea party 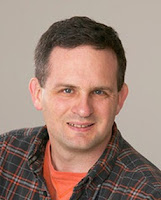 Neal Rauhauser is a blogger for the Daily Kos and uses the handle, “Stranded Wind” – a tenant to his extreme-environmental belief. Reportedly, his day job is as “plant engineer for a couple of internet service providers” working on internet protocols & devices for a variety of telecommunication systems. He and fellow Daily Kos blogger, Beth A. Becker, are also members of Net Roots Nation. At their 2009 annual meeting, Becker and Rauhauser helped organize the “Blog Workers Industrial Union” (BWIUBS) -- which admittedly began as a joke meant to rile Fox News, but evolved into an internet force of subjective bloggers who actively campaign for favored candidates.
Rauhauser talks about his technique in creating a list regarding BWIUBS,
And as result of this report his BWUIBS account on Twitter has now been locked & made private only for over a week (apologies to his t-list & hundreds of eager followers).
Having created some buzz, Rauhauser and Becker co-founded a political organization called, Progressive PST or “Progressive Politically Strategic campaigns for Twitter.” It launched on December 1, 2009; and having shown his innovation, Rauhauser was then invited to become a keynote speaker at the Net Root’s 2010 meeting.
He writes the software for Progressive PST while Becker handles their messaging and together they offer a paid-service to political candidates managing their internet campaigns, "Progressive PST was just the social media firm we needed at just the right price,” said Lainey Edmisten – Campaign Manager for the "Billy Kennedy for Congress Campaign. Kennedy is contesting a North Carolina favorite, Congresswoman Virginia Foxx – which may explain his desperate association with Neal Rauhauser.

Using his Twitter Account, “Stranded Wind,” Rauhauser coordinates with and acts at the bequest of seven national Democrat Candidates and two state candidates, who hired him to service their social media needs. Per his website, Progressive PST performs “outreach to a network of social activists, ready to accelerate your (campaigns) messaging via social media, ‘recruiting new supporters and volunteers” to further his client’s message and promote their campaigns.
Note: Volunteers are not paid employees – unless a group from Australia amassed by Rauhauser considers their recent media attention to be payment enough. Certainly, they are capitalizing on the filth that Rauhauser’s social-activist have & are still engaging in. But Neal Rauhauser is definitely paid, is a part of a political machine and represents politician’s social media concerns regarding Twitter.

According to his Daily Kos, “Constructing IEDs” article, Rauhauser wanted, 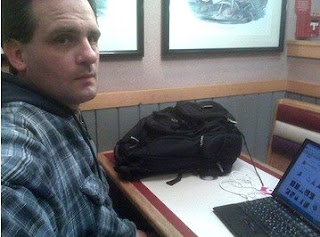 In August 2010, the funded by Democrats Neal R. Rauhauser admitted to opening an alternate Twitter account called “Wing Nut Watch.” He openly stated that he directly created the account to monitor the “extreme elements of the tea party and right-wing,” (per his DailyKos article).

When one blames another for his own wrong doing (or sick tactics) it is called, "projection." 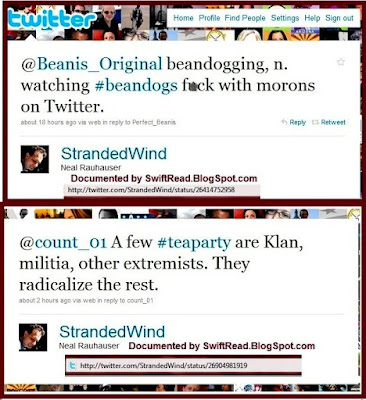 Instead of monitoring anything, Rauhauser’s group took to attacking and launching verbal assaults in a manner that few are familiar with – especially relative political candidates and those acting on their behalf. As has been disclosed, several of his volunteers are from Australia and Rauhauser also alludes to a few of them being from Canada – or what he calls “Canucks.”

On “OSINT 4 Progressives” (Open Source Intintelligence for Progressives), Rauhauser reveals his behind the scenes work as the leader of a group of listed activist – whose primary function was not about monitoring extreme behavior, but in engaging in extreme behavior. His sites have been cached to a third-party-site in case it’s scrubbed.

Many of the same articles that appear on his blogspot.com site also appear on his Daily Kos OSINT page. And then there are those not shared on the Daily Kos site; where Rauhauser exposes subversive behavior, and uses his acquired technical skill to mask the identities of recruited social activists who “help” his Wing Nut Watch account. The user ids were documented in this list, which will undoubtedly change soon. The same user ids appear in his alternate account (here) too.

The following information exposes Rauhauser taking measures to protect his band of activists. Clearly, he only feels a need to protect his radical thugs because he knows they are embarking on illegal behavior: cyber stalking, cyber bullying & issuing death threats are all punishable by law. In fact, he shows that he is organizing, coordinating and leading the hateful Twitter group who has been attacking Americans via social-media:
He goes on,
He then divulges some of his subversive IP tracing & recruitment technique,
Rauhauser further states, 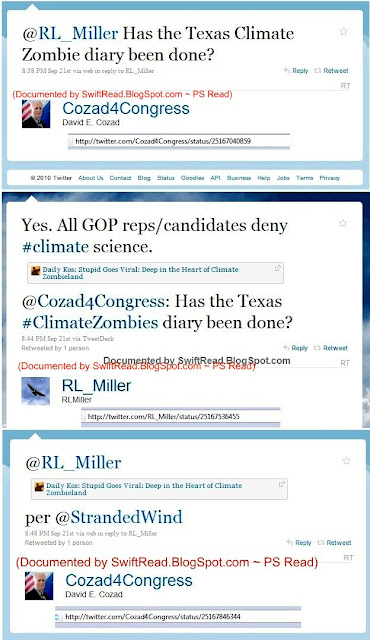 And nosing around in the personal lives of Tea Party members, their spouses & their children, is exactly what Rauhauser and his group does. They do it as a means to limit the voices of opposition whom he considers a threat – whether because of the amount of followers, the effectiveness of message or because of the IP voice waves they use. If this sounds familiar then you are familiar with the Open Letter to Barack Obama regarding "5 G Warfare," on how to best use technology to win any campaign -- of which, Rauhauser certainly exhibits the tactics.
As documentation reveals, if any are to be likened to the “KKK” or are aligned with an organization – it is Neal Rauhauser and his “recruited volunteers” – whom leftist comedians from Australia found it fun to aide citing they “helped expose vile bigotry from the Tea Party.” To date there is no proof of any racial bigotry from the Tea Party; but there is a vast amount of proof that the only people these comedians helped to expose are from their wing – the vile left.
It’s an age old game of accusing your opponent of something that you are guilty of and thus by example evading suspicion of your own wrong doing – that is UNLESS your own wrong doing is documented.

The radical left loves to accuse the Tea Party of sedition – a term they became familiar with by the likes of Bill Ayers – but one must wonder if Progressive PST’s Neal Rauhauser even knows the definition as he indicates he will become the NSA of the Progressive Party, 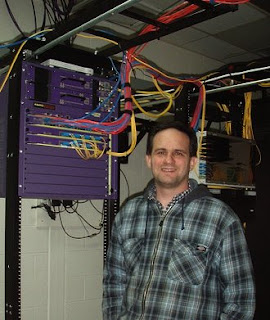 What motivates Rauhauser?
He goes onto state how he infiltrated & trolled right wing sites, including Twitter, 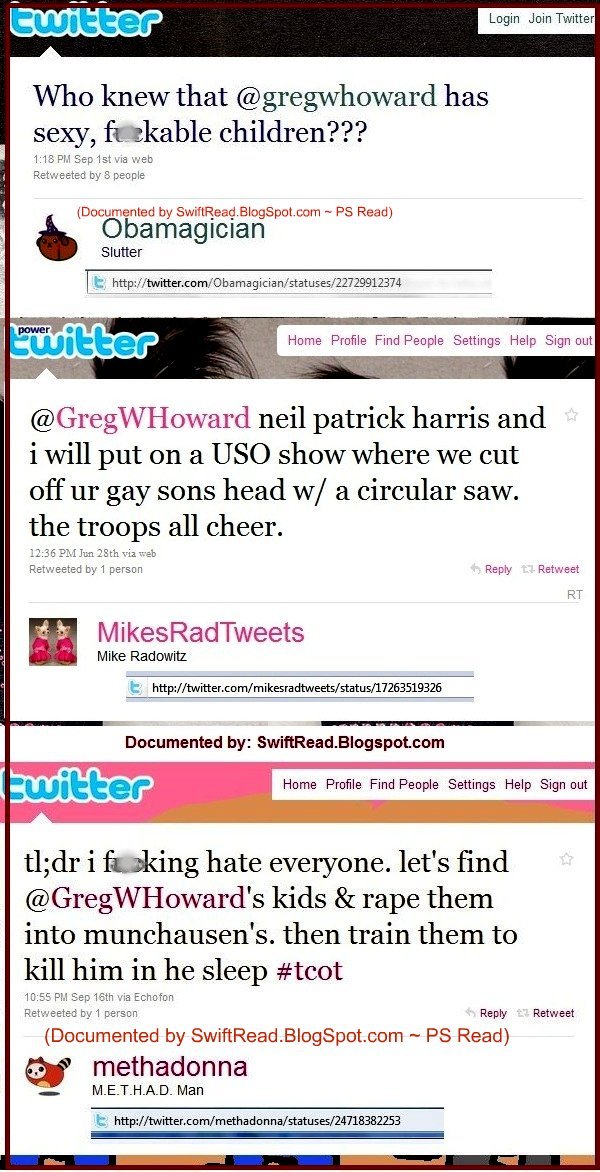 Wary indeed and who wouldn’t be when Rauhauser and his vile group – some from foreign countries (Australia), of which many members of the Tea Party fought to defend – now assault unsuspecting users on social media. And are TAMPERING with the American Electoral Process. It's reminiscent of the 2004 Elections, when the Liberal PM Candidate in Canada stated he was going to vote in the US for John Kerry (here).
Greg Howard is a retired Marine and Disabled American Veteran. He lives in a small town, and is active in his church where he plays the keyboard during service. He volunteers as much as possible within the congregation.
Greg uses his real name on Twitter too and has gained the trust of 15,000 friends. He has a site that he blogs on and runs his own small-business.

Like so many other Americans, he hit a temporary rough patch in today’s economy but still musters on, caring for his wife and two small children. But Rauhauser's crew continually brings up a small economic situation while mocking and berating him. They "nosed around in the personal life of a tea party member" and it is not partitioned, but used against him by Rauhauser's followers. They are trying to silence Greg's political discord using Castro or Hugo Chavez like intimidation tactics.

Maybe this is what the nodding head Gawkers think is so easily dismissed. In reality, it’s a felony punishable by law.

But these are the tactics and individuals that Neal Rauhauser has chosen to affiliate himself with. He is seen time and time again on his time line coordinating, communicating and participating in disgusting verbal assaults. And these are some other racist & religiously bigoted attacks targeting another Twitter user who uses his real name too.
Maybe if one was living in America until the early part of the twentieth century – they might find the screen-shot left funny. Certainly, Irish Catholics

(who are number 2 in nationality in America and number 1 in denomination) would not find this funny at all. Nor would Sicilians

.
Is this the type humor that Australia & "Gawker" find funny: death threats, rape, and pedophilia?!? Note: death threats and threatening children are Federal Crimes too, even when done online.

Racism & vile bigotry is said to come from the Tea Party. Based on this evidence, it is only coming from the far-left who uses these attacks in a lame attempt to defile and cease all forms of our 1st Amendments rights to Free Speech.
When considering Neal "Net Root" Rauhauser, and the behavior of his oppressive group of social activist & volunteers – it is obvious why he sought to hide and protect them on the internet. Most of the above tactics he has written or endorsed are illegal and punishable by law. The desperation of the Left, as evidenced in the Democrat Candidates who hired Rauhauser, is very telling. They are doing anything they can to avoid the pending Tidal Wave they face now just three weeks away.
Maybe after they lose, Progressive-Democrats will take Rauhauser up on his offer to "legally tap landlines" and run his very own "National Security Agency" – where this article was just sent.
Posted by P.S. Read at 10/13/2010 03:06:00 PM