Washington DC
By PS Read
Hank Gilbert is already enveloped in controversy while running for Commissioner of the Texas Department of Agriculture. Now information has come to light that Gilbert hired a radical-environmentalist for his campaign that is hell bent on re-engineering US Agriculture and the US energy supply.
It is already public knowledge that Gilbert has failed to report his taxes to the IRS on four separate occasions, and he has been charged for writing bad checks too. Given the current political trend of Democrats not paying taxes and spending money they can’t repay, one might think Gilbert is a perfect fit for his party – but it is clear Gilbert is not a perfect fit for Texas – especially its Department of Agriculture.
In the 2008 elections a majority of Americans got their news

from online sources. Mindful of this fact, Hank Gilbert sought out a company called “Progressive PST” (PPST) to handle his e-campaign. A political organization founded “by progressives, for progressive (candidates),” they build internet websites for their clients, and service their e-campaigns across the full spectrum of the internet. At the same time the group actively campaigns for their clients online, Progressive PST also ensures that their “clients” get favorable media coverage that often times is the result of internet bloggers.
Neal Rauhauser is a co-founder of Progressive PST, he has Cisco ratings & is a member of Net Roots Nation – a group of e-activist and bloggers. Before becoming a green-activist, Rauhauser was a plant engineer at an internet service provider (Teleco Company). He handles PPST’s technical expertise, including software, application and website development. He blogs at The Daily Kos, The Oil Drum, Mother Nature Network, The Millennium Ark, Wise Earth, The Cutting Edge News, Open Left, OSINT4Progressives; and he appears on internet radio shows including The Nicole Sandler Show and Agro-Innovations. 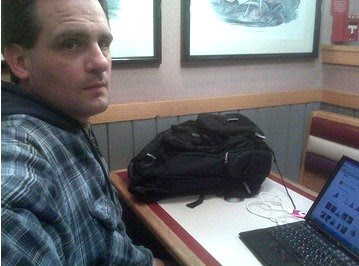 In a recent interview, Rauhauser promotes what is known by radical-environmentalist as “perma-culture” or “permanent agriculture.” The idea is to enforce an all-organic, eco-friendly agricultural system at the residential level moving away from Industrial Agriculture. In short, perma-culture endorses a serfdom style food supply & agricultural system much like the one that America evolved from during the English Monarchy’s Dark Ages

. Without using chemicals, the serfs will farm & rotate their crops ensuring soil viability and supply their own food, plus undoubtedly supply the noble few with the fruits of their labor too.
The Perma-Culture movement that Rauhauser endorses is also anti-petroleum, stating that:
1.    The US has hit its peak-petroleum supply.
2.    The US is at its peak-population and
3.    Petroleum products must be discarded because their emissions (CO2) are killing the planet and causing global warming.
a.    Cap and Trade is an avenue to discard petroleum

In the above interview Rauhauser (on Twitter as Strand Wind) cites Fritz Heber, the father of chemical weapons who sold his technology to Nazi Germany, and his discovery of energy being produced from fertilizer compounds.  Rauhauser takes the 1909 discovery to promote his Stranded Wind project – which uses a renewable energy (such as Wind, or Hydro) to produce a highly toxic form of Ammonia Energy to replace the so-called “declining petroleum supply.” He fails to mention that Ammonia emits nitrous oxide, which has 296 times the global warming potential than does carbon dioxide, and it should be noted that Gilbert’s e-campaigner seeks to set society back a full 100 years at development stages of the industrial revolution.
Rauhauser appeases those to his left, the Food Activist

, by saying, "only “some” corn will still be produced for “some” liquid fuel use."  Apparently the Left believes that corn should not be manufactured for bio-fuels for Food Security reasons. He states that corn crops will be used to replace petroleum based products (like paint, plastic, and fuel); while wheat will be used as the primary food source for the human species.
Rauhauser then drops an agricultural bombshell, stating that the Central California Valley water crisis was a net positive, “it’s where a vast amount of America’s Industrial Agriculture is located, and will now be transitioned to neighborhoods using their land to produce their own food (as opposed to relying on the Agricultural Industry).
“There will even be urban chickens, just like during the Great Depression,” said Rauhauser.
On MNN, after promoting Cap and Trade

, he states, “Much like the United States of December 1941, we face a massive retooling to deal with the twin threats of ‘fossil fuel depletion and climate change,’ and a retooling of our beliefs and attitudes is going to be a large part of the change we face.”
Rauhauser goes on to explain that before the advent of natural gas, “40% of America used to be involved in food production. Now only 1 to 2% of Americans are involved in agriculture, which is completely unnatural and it won’t last. It can’t last and there’s no way around it.”
Rauhauser has an answer to the Industrial Agriculture problem though. He presented a plan to Buffalo, NY and to Iowa that would establish “green house farms” to mass produce fruit and vegetables using the run-off heat fuel from his Ammonia-Energy mass production plants.
He continues down the path of his social-reengineering dream by describing the only Mass Production Ammonia plant in use today, “It’s in Zimbabwe, and services about 250 megawatts with 180 miles of power lines. Of course,” he says, “it is limited only by the value of their currency and governmental problems.”
What came first, the urban chicken or its egg?

The fact is that petroleum based energy is 40% more efficient as an energy source, which was the motivating reason that Henry Ford decided to use gas to fuel his car and not another more expensive renewable, like steam or ammonia. Maybe if Zimbabwe learned to be more efficient, their currency and government wouldn’t be in such ruins.
While Hank Gilbert attacks Todd Staples for Gas Prices – which the Department of Agriculture is somehow responsible for – he fails to mention his campaigns link to the promotion of Cap and Trade which “would necessarily make energy cost sky-rocket,” per President Obama. And Gilbert doesn’t talk about his campaign link to the advent of Ammonia Energy, which also has greenhouse gas emissions.
Maybe Gilbert can explain how opposition to an “all of the above approach” will somehow lower energy cost and spark the lulling US economy.
Peak Oil and the Petroleum Decline?
The fact of the matter is that the United States of America has more petroleum potential than any other country in the world. The natural gas contained within the upper Appalachians would last us more than 100 years alone. The reservoir could deliver up to 516 trillion cubic feet. By comparison, the yearly consumption of natural gas worldwide is slightly above 100 trillion cubic feet. Of course, radical Left groups like the Sierra Club, has seen fit for us to not extract it. It seems the far Left would rather we rely on enriching OPEC than to produce our own.
Not to mention the US oil shale potential – a game changer in the world’s petroleum supply.
“Studies over the years by industry and government alike estimate that there may be between 800 billion and more than one trillion barrels of oil locked up in these rocks which is nearly three times the amount in known reserves of Saudi Arabia. It’s enough oil to supply America for the next 400 years & is coming eventually. It’s just a matter of when,” says Mayor Roy McClung, of Parachute, Colorado, a community in the heart of oil shale country. “Should all the stuff come into place, this area is going to–well, I don’t know if anyone is ready for that kind of growth.”
And of course, there is Texas.

Texas is the leading crude oil producing state in the nation and its 27 petroleum refineries produce more than 4.7 Million barrels of crude oil per day or 1/4th of the Nation’s total capacity. And 1/3rd of the USA’s total natural gas comes from Texas, making it the Nation’s current leader in natural gas production.  With 2,000 wind turbines in West Texas alone, it also leads the nation in wind power generation. But if Neal Rauhauser has his way, the petroleum supply from Texas will take a back seat to the less efficient and more costly wind energy.
Rauhauser states his motivation is, "out of a direct profit motive, but the real profit in our eyes will be access to Democrats we helped to get elected.” Like Hank Gilbert, candidate for Texas Department of Agriculture, who is right in Rauhauser’s wheel-house.
Per the Energy Information Administration (eia.gov) “Over millennia, humans have found ways to extend & expand their energy harvest, first by harnessing draft animals and later by inventing machines to tap the power of wind and water. Industrialization – the watershed social and economic development of the modern world – was enabled by the widespread & intensive use of fossil fuels unlocking the Earth's vast stores of coal, oil, and natural gas. The result was one of the most profound social transformations in history.”
It now seems that Hank Gilbert wants to set our society back 150 years to pre-Industrial Revolution time. Why else would he seek the help of Rauhauser – a radical environmentalist hell bent on enforcing costly renewable energies that would stymmie an already suffering economy, who also promotes a perma-culture society?
And if Mr. Staples thinks that Gilbert’s attack on him regarding salmonella was bad, it must run throughout Gilbert’s campaign because Rauhauser is linked to vile attacks on social-media users going back months. Rauhauser the Radical recently reported that every member of the tea party, Citizens United, the Republican Party, including the Koch Brothers, are ALL racist; including Alveda King!
Hank Gilbert, a Candidate for the Texas Department of Ag, should have known better than to hire a vile, global warming nag.